Buildings and Energy - a systematic approach 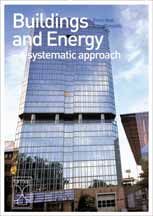 In many existing buildings, energy conservation measures have significantly reduced the demands for heat supply. In new buildings, advances in a wide range of technologies have led to even greater reductions. On the other hand, demands for electrical energy have risen noticeably. Unfortunately, it now seems that the use of both heat and electrical energy is starting to increase, especially in non residential buildings, and without any corresponding increase in the quality of the indoor climate. In this book, the authors present a systematic and holistic approach to both conserving energy and ensuring good indoor climate when designing new buildings or renovating existing ones. In their opinion, the harmonization of the design of a building and its HVAC systems is fundamental to these issues. The authors of Buildings and Energy – a systematic approach wish to share their knowledge and experience in this field with developers, planners and builders.

Enno Abel is Professor Emeritus at Chalmers University of Technology in Gothenburg, Sweden. He was appointed Sweden's first professor of Building Services Engineering in 1975 and for 25 years was in charge of teaching and research. Before his appointment he had had extensive experience as a design engineer and chief consultant on projects that included office buildings, laboratories, hospitals and industrial buildings as well as a number of Swedish embassies around the world. He has been a visiting researcher at Lawrence Berkeley Laboratory, Berkeley, California and a board member of many large companies. He is also a member of the Royal Swedish Academy of Engineering Sciences.

Arne Elmroth is Professor Emeritus of Building Physics at Lund University, Sweden. He was appointed Professor of Building Technology at the Royal Institute of Technology in Stockholm in 1984 and Professor of Building Physics at Lund University in 1988. The main area of his work is energy performance in the built environment, airtightness, and heat and moisture transfer in building envelopes. He has been an expert advisor to the European Commission regarding the Directive on the Energy Performance of Buildings and is chairman of the ISO/TC 163 on "Thermal performance and energy use in the built environment". He is also a member of the Royal Swedish Academy of Engineering Sciences.

This book is available in printed format, and can be ordered through any bookstore.