Why should we promote women scientists – in times of diversity concepts? 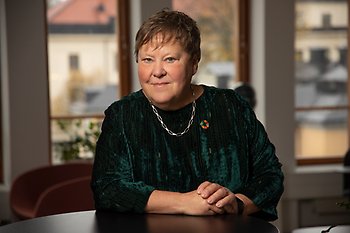 Once I was a young administrator at the Swedish Ministry of Finance. Together with two female colleagues, I was sitting and waiting for the minister to present a complicated matter. Our male colleagues were late. The door opens and the minister comes in. He looks around and exclaims in a loud voice: Isn’t anyone here? In his eyes, we women and our expertise were obviously invisible.

I’m not the only woman who’s ever experienced this. Being made invisible. An event that happened more than 30 years ago, but that etched itself into my memory. Weren’t we good enough? Didn’t we have what it took?

Sonja Kovalevsky was Sweden’s first and the world’s second female professor. She was born in 1850 in Moscow, and began her studies in St. Petersburg and then continued at various universities in Germany. As a woman she was not allowed to attend lectures, so she read lecture notes and received private tutoring. In 1884 she came to Stockholm and was appointed professor of mathematics at Stockholm University, then a privately run school, which enabled her appointment. At the state-funded universities, the door was closed – as in the rest of Europe.

Marie Skodlowska-Curie was the first woman to receive the Nobel Prize. She received the prize in physics in 1903 with her husband Pierre Curie and Henri Becquerel. Originally, the prize was intended to go to the two men. But Pierre refused to accept the prize unless Marie got to share the prize with them, since she had been decisive in the research. So it was changed. The Curies worked together at the Université de Paris, where Pierre held a professorship. When he died in an accident in 1906, Marie Skodlowska-Curie became the first female professor at the university. In 1911 she received her second Nobel Prize, this time in chemistry.

I’ve highlighted two women here who were both active in science. This is no coincidence. In the late 19th century, according to Christina Florin, professor emerita of women’s history at Stockholm University, humanities subjects like classical languages and theology were considered most prestigious. So it was most difficult to make any headway in these areas. Science, on the other hand, was trying to define itself in the world of academia, which made it easier for women to find their place.

At that time, the main representatives of universities – men – considered that women were too weak for study and not sufficiently talented. Women as a group were considered to have smaller brains and less energy, which was also reflected in the Swedish political debate. Until 1925, it was forbidden for women to have higher government posts in Sweden. It wasn’t until the so-called qualification reform that same year that opportunities opened up for women to pursue an academic career as teachers and researchers.

So what does it look like today, barely a hundred years later? Now more than 60 percent of all students at universities and colleges are women, and female dominance is increasing. Unlike a hundred years ago, women dominate in the humanities, although even here men hold the highest positions, while only a third of graduates in civil engineering programmes are women. But this proportion is slowly increasing.

In 2018, 29 percent of professors were women. This percentage has increased by 10 percentage points since 2008. But this increase now shows signs of being stalled or at least slowed down. However, this percentage varies greatly depending on the subject area and on the school. If we look at qualifications positions, the picture is more equal, but with a clear gender coding in terms of subject areas.

What has driven progress towards a more gender-equal world in academia?

Over the years, the UN’s Universal Declaration has been supplemented by various conventions, and in December 1979 the Convention on the Elimination of All Forms of Discrimination against Women – the Convention on Women – was adopted. The Convention highlights the need for legislation. But it states that parties also commit themselves to countering prejudices based on the notion of the inferiority of one sex or on roles set in stone for men and women. It’s interesting to note that this is the convention against which most States have dissented against.

The legislation is in place – So why does gender inequality persist?

Women’s and men’s skills are assessed differently. In Sweden, Professor Agnes Vold has drawn attention to this issue. In a review report, she and a colleague found that women needed significantly better academic qualifications than men in order to succeed in applying for posts and research grants at the Medical Research Council. This report led to the board’s resignation, and the report was summarized in an article published in 1997 in the journal Nature called “Nepotism and Sexism in Peer-Review”.

But even later studies show that men and women are treated differently in the peer-review process. When the Swedish Research Council allowed observers to sit in on review panel meetings, they found that people talked differently about men and women. For example, women’s family relationships were discussed but not men’s. And if men followed in the footsteps of their teachers, it was judged to a positive thing while a woman was considered not independent.

The circle of good and evil. To be noticed by speaking at major conferences, sitting on panels or being elected to academies and learned societies often brings even more attention and thus more merit. Similarly, very good researchers are often forgotten or invisible if they don’t get this opportunity. Here, the “right” contacts and networks play a huge role.

Housekeeping for academia. An important part of qualifying for higher positions and research grants has been to publish in prestigious journals. But the academic work includes so much more than this: teaching, interaction with the surrounding community and, not least, administrative roles and duties. Women are given and take on a great responsibility here, perhaps because of the outdated view that women have a particular aptitude for service and care, which puts them at a disadvantage in terms of traditional academic careers.

Where there’s money, there’s power. If we look at how money is distributed in the female and male-coded areas, the so-called “male” areas clearly get more. This is especially true within infrastructure, where we make major investments linked to physics for example. And in Sweden, the government has decided in recent years to launch major excellence initiatives, and these have mainly been awarded to established male applicants.

The norms and perceptions that exist in society about what a man and a woman should do are, of course, also reflected in academia. It’s interesting to note, however, that who should do what can shift over time, but that female-dominated subjects or sectors either have or are assigned a lower status with feminisation. Now it is not classical languages and theology which are most prestigious, but science.

The image usually painted of the researcher and not least the professor – the male genius – reinforces this. When research is illustrated using an image even these days, the image is often of a middle-aged man with goggles, a white coat and a test tube containing a coloured liquid. This image makes many – especially women – feel excluded.

What is being done, and what can be done better?

Most higher education institutions and funders have well-established systems for creating gender-disaggregated statistics to analyse activities from a gender perspective on an overall level.

Formas, like other research funders, strives to have gender-balanced assessment panels (60-40), and we analyse the results of our calls from a gender-equality perspective. A statistic we always produce is the number of applications relative to the awarded projects for each sex. If the deviations are large, Formas conducts an in-depth analysis of the causes.

One way that’s sometimes discussed to accelerate gender equality is to use quotas. Quotas have only been used to a very limited extent in Sweden. The most high-profile case is the so-called “Thamtjänsterna”, an affirmative action initiative from 1995, where 31 professorships were reserved for women. Reactions were strong. The positive special treatment was considered to conflict with the open application procedure and the objectivity of the appointment procedure, which was supposed to be based solely on merit. The proposal was also reported to the European Court of Human Rights. A later evaluation shows that at the time of the appointments there were highly qualified applicants who could reasonably have received professorial posts without affirmative action.

What can and should we do better?

But why is gender equality important in academia?

But why only highlight the gender perspective when we should use the same arguments for a broader diversity perspective within academia?

Today, we don’t just talk about the lack of discrimination but of the importance of diversity in holding communities together and creating inclusion, creativity and innovation. So why dwell mainly on the issue of gender balance? Well, one reason is that it is easier to define, address and evaluate than issues like ethnicity, religion or sexual orientation. The other diversity issues that certain measures have addressed are similar in nature to the gender issue.

One such issue involves age. Older researchers often have a stronger CV, since they have had a longer time to accumulate their merits. This is why Formas and many other funders have specific instruments that are targeted only to researchers who have received their PhD in more recent years. This kind of affirmative action isn’t usually questioned, and contributes to the diversity of ages in the research community.

Another diversity perspective that has been prominent in Swedish politics from time to time involves social background or class. A key element was the educational social reform from 1965, where it was decided that student financial aid should be given regardless of parents’ income. This meant that the student became independent of family ties. This financial aid, together with the fact that all education is free of charge, has opened up higher education for more people. Another aspect of this is the creation of new universities and regional higher education institutions. However, the differences are still great depending on whether or not the parents are highly educatated.

In terms of things like ethnicity, religion, political opinion or sexual orientation society has mainly tried to fight discrimination. In Sweden, we don’t have a general register of these factors for individuals, which is also why it’s hard to measure and evaluate what diversity looks like. In the light of history, I do not believe that we should have such a register either. That’s not to say that diversity isn’t also important in these respects, which is why all teaching, communication, images and more must be inclusive and show a diversity perspective.

We are part of many groups

Working to promote female researchers helps to draw attention to their important work and to increase our understanding of power systems and social structures. In this way, I believe not only that these efforts contribute to greater equality, but that this understanding also contributes to greater diversity in the broader sense.

And today, thirty years later, I hope that the minister would instinctively acknowledge and understand the skills we women possess!

Thank you very much.