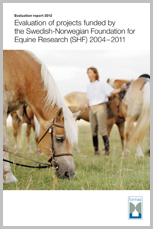 In August 2011 the board of the Swedish-Norwegian Foundation for Equine Research (SHF) asked the Swedish Research Council for Environment, Agricultural Sciences and Spatial Planning (Formas) to review the research supported by the SHF. The Foundation was established in 2004 and has since administered steadily increasing amounts of funding contributions from the equine industry in Sweden and, from 2009 onwards, also Norway. Formas has also contributed to the Foundation since 2006.
The scope of the review was scientific quality, relevance for the equine industry and the dissemination of research results from all projects granted funding and that had submitted final reports prior to September 2011. A Nordic cross-disciplinary evaluation panel was formed, which included veterinary, agricultural and behavioural competences as well as social sciences and representatives from the equine industry.

The report is also available in Swedish.